What We Love About the 2014 Honda Civic Si 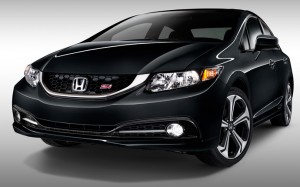 The 2014 Honda Civic gives drivers a range of options, and if you visit a Tri-State Honda Dealer near you, we’ll be happy to go over them all with you. There are many different powertrain choices, different trim levels, and even whole different vehicles that bear the Civic name. Like the 2014 Honda Civic Si.

This sport-tuned take on the Civic is unlike much else on the road today, and it feels just as comfortable on the street as it would feel on a racetrack. If you want a change from the normal small car, the Civic Si is the way to go.

The first thing you’ll probably notice about the Si is that it’s got quite a different engine from the 143-hp model in the standard Civic sedan and coupe. The Si comes with a 205-hp engine capable of 174 lb-ft of torque, giving you the power befitting a car that looks so stunning.

That stunning look isn’t’ just limited to the rear air diffuser, new front bumper garnish, or large wing spoiler, though. You see it from the driver’s seat too with the latest in technology to go right alongside the black and red interior—inspired by carbon fiber elements for trim.

On both the Civic Si Sedan and the Si Coupe, you can see Honda’s new 7-inch Display Audio touchscreen with smartphone-like interface, the next generation of HondaLink, push-button start, Honda LaneWatch, and so much more.

Built for both the track and the modern tech-friendly driver, the Civic Si has impressed us since the moment we saw it in a showroom.

The 2014 Honda Civic Si is one of those cars that can only be described so far, and at the end of the day, you’re going to have to get some quality time in the driver’s seat before you can make a decision.

So visit a Tri-State Honda Dealer today and let us set you up with a test drive.