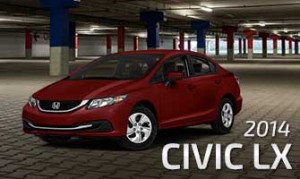 August was a great month for Honda sales, with the Accord receiving near-record sales, and we’ve just heard that the 2014 Honda Civic‘s sales hit 34,032. What is it about this car that makes drivers so excited to get behind the wheel? Like with the Accord, it’s not just one single thing, but we’ve got a quick overview of the Civic and what has made it one of our best-selling cars at Tri-State Honda Dealers.

What Makes the Civic so Successful?

Under the hood of the 2014 Civic is a 143-hp four-cylinder engine, and 2014 Civic Sedan models with CVT earn an EPA-estimated 39 highway mpg.* That tends to get the attention of most drivers, but there’s so much more to the Civic than its fuel efficiency.

Entry-level Civic LX models come with some of the best features in their class, including:

Can you find features like these on competing models? Certainly. But Honda gives them to you at no additional cost, with no need to upgrade your Civic. To see how the 2014 Honda Civic compares to competing compact cars, see one of our seven side-by-side comparisons. We think you’ll see just why it is the 2014 Civic is one of the best options in its class.

As one of the most affordably priced small cars on the market, it’s little wonder why so many drivers love the Civic, but you really should see it for yourself. Visit a Tri-State Honda Dealer and let us put you behind the wheel of the latest Honda Civic so that you can find out if it’s the right car for you.

*Based on 2014 EPA mileage ratings. Use for comparison purposes only. Your mileage will vary depending on driving conditions, how you drive and maintain your vehicle, battery-pack age/condition, and other factors