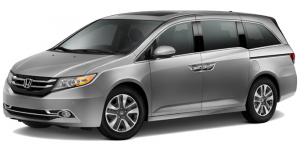 If you’re shopping for a minivan, you’re likely looking for space for your whole family—but have you given much thought to amenities?

The 2016 Honda Odyssey standard features include a host of outstanding, family-centric offerings that are not found in many competing minivans in the marketplace.

With the Odyssey, drivers will get outstanding space for their loved ones as well as prime features to make family travel easier, more convenient, and more fun.

Ready to learn more? Keep reading, and we’ll explore the exceptional Odyssey’s features in detail and how they compare with rival vehicles. Get ready to be impressed by the family-focused amenities onboard this popular minivan!

One of the Odyssey’s most popular features—particularly for parents who drive with kids onboard—is the unique HondaVAC.

The HondaVAC is a vacuum cleaning system built right into the Odyssey that comes standard in the Odyssey SE and Touring Elite trims.

HondaVAC has an extended reach to get the whole vehicle clean as well as a convenient removable waste bin that can be quickly emptied. This impressive system makes cleanup a breeze after long trips—or even short ones, since it doesn’t take kids much time at all to make a mess in the backseat.

Top minivan competitors like the 2016 Chrysler Town & Country, the 2016 Dodge Grand Caravan, the 2016 Kia Sedona, the 2016 Nissan Quest, and the 2016 Toyota Sienna do not offer built-in vacuum cleaners.

Entertainment for the Family

Kids not only like to make messes during car trips, but they also get bored easily. If “Are we there yet?” isn’t exactly your favorite phrase, the Honda Odyssey offers a perfect solution that will have your kids saying, “We’re already there?” instead.

This system comes standard in three of the Odyssey’s trim levels and is an available feature in a fourth trim. A Honda DVD UltraWide Entertainment System with HDMI technology, a 16.2-inch screen, and two wireless headphones is also offered as a standard amenity in the top-level Odyssey Touring Elite model.

Whichever entertainment system you end up with, you’ll bless the day you got it—and so will your kids.

The Dodge Grand Caravan has two available entertainment systems, and these, too, are only offered as optional upgrades, and only for the top two trim levels—they aren’t offered standard in any of the Grand Caravan models.

Various other features come standard in the Honda Odyssey that are not available onboard competing minivan nameplates.

For instance, the Odyssey offers a standard anti-theft stereo system in each trim level, which is a feature not found in any of the Town & Country, Grand Caravan, Kia Sedona, Nissan Quest, or Toyota Sienna models.

At the lowest-cost base model level, the Odyssey also features a standard rearview camera with guidelines. In contrast, a rearview camera is not offered in the base-model Nissan Quest and is only offered as an optional upgrade for an extra cost in the Dodge Grand Caravan base model.

The Honda Odyssey base trim further features a standard power driver’s seat, which the Grand Caravan, Kia Sedona, Toyota Sienna, and Nissan Quest base-price models do not have and which is only available as an optional upgrade in the Chrysler Town & Country.

Consumers can further explore the exceptional offerings of the 2016 Honda Odyssey at any Tri-State Honda Dealers location.

Stop in and see us or contact us today to learn more about the Odyssey’s features and options and to experience this impressive minivan for yourself—behind the wheel and out on the road.