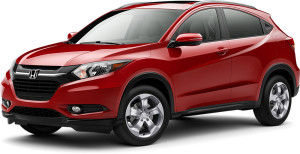 While there’s no such thing as a sure investment, it’s tough to look at the 2016 Honda HR-V residual value estimates and think of much else. We put Honda’s new compact crossover up against some of its top competitors to give you an idea of where you can find value in this segment of the auto market. We think Tri-State drivers will be excited to see just how well the HR-V, which is already regarded as one of the safest SUVs on the road, compares to competitors from a handful of different brands.

Before we dive into the comparison, we should review what residual value is and why it matters so that everyone is one the same page.

What Is Residual Value?

The majority of things that we buy and use depreciate in value as we use them and as new versions come out—your current smartphone is undoubtedly worth more than one from five years ago, for instance—and the same is true for cars. The residual value of a car is the value that’s left after a certain amount of time, expressed as a percent of its initial price.

While it’s not possible to know how much a vehicle will be worth in the future, it is possible to estimate its future value based on market factors, features, price, and brand reputation. We left the estimations to the pros at ALG, as they provide residual value estimates for all new vehicles so drivers and dealers can know what to expect of their investments.

The compact crossover class is still growing, but the 2016 Honda HR-V residual value estimates already beat out four of its top competitors:

Now that you’ve seen the competitors, take a look at the HR-V:

Residual values might sound like they only matter for drivers looking to sell their vehicle one day, but the fact is that they are a great way to boil down all of the features of a vehicle into a number that can easily be compared. For a more in-depth comparison, we put the HR-V up against a handful of its competitors, including a side-by-side comparison in our 2016 Nissan Juke review.

This is the first year the HR-V has been a part of the Honda lineup, but we’re excited to see where it’s going. Visit a Tri-State Honda Dealer near you today to take a test drive of Honda’s latest crossover and see how it has earned such high residual value scores.