Does the 2016 Chevy Cruze MPG Compare with a Honda? 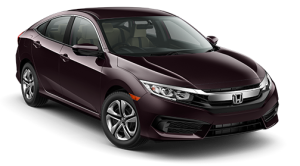 With gas costs fluctuating crazily for the past several years, including reaching unprecedented heights in terms of price at the pump, fuel economy has become an even bigger deal than ever before for motorists.

When consumers are shopping for a new car, fuel efficiency is typically high on the list of make-or-break factors governing which vehicle they’ll ultimately choose.

As they compare vehicles, drivers may be wondering how the 2016 Chevy Cruze’s mpg compares with the competition.

If fuel efficiency is an important factor in your vehicle search, consider the 2016 Honda Civic, which offers superior fuel economy compared to the Chevy Cruze.

Today’s savvy driver wants it all: exquisite style, cutting-edge amenities, and big savings at the gas pump. Consumers will get all that and more in the exceptional new Civic.

In terms of gas mileage, Civic models achieve up to an EPA-estimated 42 mpg on the highway,* while the Chevy Cruze has only been rated at 40 highway mpg.

Hit the Road in the Impressive New Civic

Drivers can experience the satisfaction of operating a vehicle with exceptional performance and fuel efficiency by taking the 2016 Honda Civic for a spin on the open road.

Visit or stop by any Tri-State Honda Dealer, and a knowledgeable member of our team will take the time to go over all the Civic options, answer your questions, and set you up on a test drive of this exceptional, ever-popular Honda car.

*Based on 2016 EPA mileage ratings. Use for comparison purposes only. Your mileage will vary depending on how you drive and maintain your vehicle, driving conditions and other factors.

0 comment(s) so far on Does the 2016 Chevy Cruze MPG Compare with a Honda?