The 2015 Honda Accord V6 Brings You Power 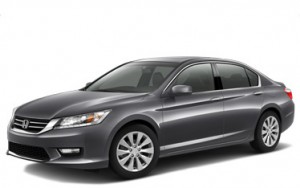 When it comes to the Accord, it’s tough to narrow down just what our favorite features are, but one of the options that has the highest appeal here at Tri-State Honda Dealers is the 2015 Honda Accord V6 engine. Many competing mid-size sedans don’t even give you the option of a six-cylinder powertrain, and some drivers expect that kind of power out of their cars.

We wanted to highlight the key differences between the Accord V6 and the standard four-cylinder engine so that you can see why there are so many drivers upgrading to the larger engine.

Before we break down the differences between these two engines, we want to make it clear that we think the 2015 Accord’s standard four-cylinder powertrain should have plenty of power for the typical driver.

It’s okay to not want to upgrade from the 185-hp 2.4L four-cylinder engine with 181 lb-ft of torque; those stats are quite good for a mid-size sedan. The 2015 Accord LX CVT model’s EPA-estimated 36 mpg highway fuel economy* certainly makes this engine a sound choice.

But if you want more power, the 3.5L V6 found on the EX-L V6 and Touring trim levels should do the trick:

If you’re the kind of driver who prefers a stick shift, you can find it on the EX-L V6 Coupe models.

We can compare power, torque, and fuel economy ratings all day, and we’ll be happy to go over the differences between the manual transmission and the six-speed automatic that you’ll find on Accord V6 Sedans, but when you’re looking at different engines, the truest test is to just put your foot to the pedal and drive.

Visit a Tri-State Honda Dealer near you to take a test drive of a 2015 Honda Accord with a V6 under the hood.

*Based on 2015 EPA mileage ratings. Use for comparison purposes only. Your mileage will vary depending on driving conditions, how you drive and maintain your vehicle, battery-pack age/condition, and other factors.