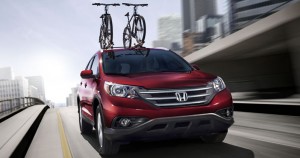 While we at Tri-State Honda Dealers are proud to offer area drivers access to some of the best vehicles around, we have no trouble acknowledging when another automaker has a good vehicle on their hands.

We’re telling you because Honda’s engineers have developed a superior engine. While both vehicles have the same highway fuel economy, Honda’s engine offers 185 hp to Toyota’s 176 hp.

That’s far from the only place Honda comes out ahead either. The CR-V offers incredible safety ratings, netting five stars from the NHTSA in front passenger crash, overall frontal crash, and side pole crash safety ratings, giving the vehicle a five-star overall safety rating.

The RAV4, on the other hand, gets three stars for front passenger crash safety and four stars in the other categories, for a four-star overall rating.

Toyota makes some similar features available, but if you want them all, you’ll have to upgrade.

Take the CR-V for a Spin

We think we’ve made a pretty strong case for the 2014 Honda CR-V, but at the end of the day, it’s a vehicle that has to be experienced to really understand just how great it is. We encourage you to visit a Tri-State Honda Dealer today and take one for a spin. We think you’ll be glad you did.

*Based on 2014 EPA mileage ratings. Use for comparison purposes only. Your actual mileage will vary depending on how you drive and maintain your vehicle.